Many medical conditions are haunting our species, against which there is almost nothing to do now. Degenerative diseases, organic and immune system dysfunction, and advanced cancers are some diseases whose diagnoses are often hopeless for people since the risk of deterioration and death is high. Faced with a potentially terminal diagnosis, patients generally become discouraged and anguished, developing psychological conditions such as anxiety and depression that, in turn, deepen the primary picture. To try to mitigate the adverse psychological effects of their diagnoses, researchers have given patients psilocybin, a natural compound with psychedelic properties, with encouraging results.

Psilocybin is a compound found in mushrooms of the Psilocybe species. Its role is to protect the fungus from predators such as ants and other insects that, when eating the mushroom, quickly feel satiety due to psilocybin’s effect. But when a human consumes this substance, the effects are considerably different. The user experiences a psychedelic ‘trip’ where perceptions are sharpened, and a phenomenon known as “ego dissolution” is stimulated. As a result of ingestion, the consumer is immersed in an experience that they describe as “a deep connection with the cosmos” and the transformation and healing in consciousness.

The interpretations of the psychedelic experiences stimulated by psilocybin have been studied for decades to apply its principles to various psychological treatments: treating addictions, anxiety, and depression, among others.

In February 2022, a research team from the Johns Hopkins University Center for Psychedelic and Consciousness Research — a pioneer institution in this field — published the results of a study. Twelve patients with terminal cancer diagnoses underwent psilocybin-assisted treatment, and the results indicated a considerable improvement in major anxiety symptoms.

An article about a clinical trial in which patients with the same condition as the previous experiment took moderate-high doses of psilocybin was published in Science recently. The article’s authors stated that “cancer patients with depression experienced marked improvements in psychosocial and spiritual well-being after psilocybin-assisted therapy. These improvements […] were maintained up to 8 weeks after dosing. Therefore, the results of this study demonstrate that [assisted psychedelic administration] was a useful measure in the context of psychedelic research.”

As we continue to develop novel techniques and mechanisms to find a cure for terminal diseases such as advanced cancer, resources need to be invested in palliative care that substantially improves the lives of terminally diagnosed patients. For example, psychedelic-assisted therapy has repeatedly provided psychological relief to patients, mitigating anguish and favoring the peaceful acceptance of death.

“Subjective reports indicate that psychedelic therapy can foster acceptance of adversity, as attempts to exert control over a challenging psychedelic experience often fail, while allowing and letting go provides the desired relief. This encounter teaches one to move toward suffering rather than away, transforming habitual avoidance into a growth-oriented attitude,” the authors conclude.

Evidence indicates that the therapeutic potential of psilocybin mushrooms is promising. We cannot afford to arbitrarily ban the use of a medicine that has the potential to improve people’s lives. In this sense, society must commit to promoting legislative measures that address the stigma associated with this substance and encourage clinical research so its benefits can be exploited.

Editor’s note: The headline of this article has been updated to clarify that “Experts Used Hallucinogenic Mushrooms To Treat Cancer Patients.” The final word was missing in a previously published version, which made it sound like the mushrooms were used to treat cancer, as opposed to cancer patients. We regret this error. 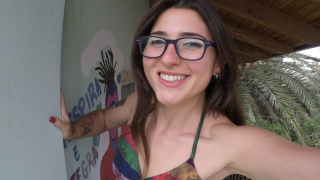 Antonella Perdigues
Antonella is an Argentine physicist who has dedicated her career to disseminating information related to the astronomical sciences. She has been a hobby writer since childhood and enjoys creating stories that combine fiction, drama, and mystery with scientific themes.
You Might Also Like
Medicine

Being in Space Destroys Humans’ Blood

These Tiny Microrobots Can Clean Deadly Pneumonia From Lungs

Intermittent Fasting Shown to Protect Against Alzheimer’s Disease in Animals

Designer Babies Already Walk Among Us